HBOT & AUTISM THERAPY: WHAT YOU NEED TO KNOW

Autism is very misunderstood. In fact, it wasn’t until the 1960s that researchers and physicians began to truly recognize autism as a treatable condition.

Even today, our understanding of autism and our approach to treating it is changing rapidly. In today’s article, we’ll talk more about autism, its symptoms, common therapies, and research into hyperbaric oxygen therapy as a possible autism treatment.

Most people realize that cancer is not a single well-defined condition with a unified course of treatment. Different cancers develop in different parts of the body, with some requiring radiation, chemotherapy, surgery, or other interventions.

But many people don’t realize that autism is quite similar. Decades of confusion over the definition of autism and poor representations of people with autism in mass media have resulted in plenty of misinformation.

Thanks to increased awareness and better screening methods, autism is most often diagnosed in children. However, for decades autism was overlooked and many adults suffered for decades. Perhaps the most well-known case is Dr. Michael Burry (inspiration for the movie The Big Short), a physician himself who lived with undiagnosed autism until his child was diagnosed and he realized they shared the same symptoms.

If a doctor can overlook the condition, who’s to say how many other adults are living with undiagnosed autism?

There is no “cure” for autism. Due to the variability and range of Autism Spectrum Disorders (ASD), it is also impossible to predict a person’s long-term prognosis. Many people with what is known as high-functioning autism may be able to manage their condition very well.

However, because of autism’s inherent complexity, there is no single “best” treatment option. In fact, the Autism Society does not recommend any specific course of treatment. What improves the life of one person may have vastly different effects on another. A few of the most common traditional autism treatments include:

Due to the challenges of treating autism, relying on a single individual therapy or treatment method can produce inconsistent and frustrating results. 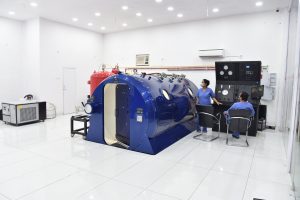 Hyperbaric Oxygen Therapy (HBOT) may play a role in the treatment of some people with autism. In a recent study, patients with autism who exhibited aggressive behavior were treated with HBOT. The use of SPECT brain scans showed some “enhanced neurophysiologic function” after treatment. In this study, HBOT was administered under the supervision of a physician and:

There is also a strong connection between autism and epilepsy. Many people with autism also suffer from epileptic seizures. The results of a study focusing on HBOT as epilepsy treatment were promising. In over 68% of trial subjects the results showed that seizures greatly diminished, and the results of an EEG were improved. In a 3-year follow up it was found that the majority of participants in the study were suffering from fewer seizures and needed less medication than before HBOT.

Normally, the air we breathe here in Portland is about 20% oxygen. By using specialized HBOT chambers we can create an environment of pure oxygen. This highly-oxygenated environment promotes healing in the body, reduces inflammation, increases circulation, and fights disease and infection.

HBOT at Urban Wellness Group is a safe, healing, and relaxing treatment. Our HBOT chambers are among the most powerful in the state of Oregon. Other conditions improved through the use of HBOT may include:

Can HBOT be part of your autism treatment?

While there has been some research into HBOT as autism treatment, further investigation is needed. That said, HBOT may be worth investigating as a part of your approach to autism treatment. But it should not be your only autism therapy and you must realize that you may not experience the same benefits as other people with autism.

If you’re interested in speaking with a physician at Urban Wellness Group about HBOT therapy, contact us today.

Hyperbaric oxygen is used to treat all conditions which benefit from increased tissue oxygen availability and infections where oxygen can be used for its antibiotic properties, either as the primary therapy, or in conjunction with other drugs.

To consult our Doctor you have to pay for 500 rupees.