Traumatic Brain Injury (TBI) has been a common topic in the news recently, often mentioned in discussions of the danger of contact sports like football. But did you know that millions of people in the India suffer a traumatic brain injury and post-concussion syndrome every year?

Slipping on an icy sidewalk, falling off a bicycle, or being involved in a seemingly minor car crash can all lead to a TBI, otherwise known as a concussion. As more research is conducted on the causes, symptoms, and effects of TBI, doctors and scientists are beginning to realize brain injuries are much more complicated than once thought.

In today’s article, we’ll talk about the confusion surrounding TBI, the side effects and symptoms of TBI including strokes, and how research shows that Hyperbaric Oxygen Therapy could be a valuable tool for TBI and stroke treatment and recovery.

DID YOU KNOW: TBI may be hard to diagnose because the injury can cause temporary memory loss. A person might not even remember how he or she was injured– or that they were injured at all!

TBI and Concussion Symptoms and How They Lead to Misdiagnosis & Complications

Imagine two people involved in the same car accident. One loses consciousness and the other remains alert throughout the accident. One begins feeling dizzy a few days later while the other feels a strong sensitivity to light (like the early stages of a migraine). One starts experiencing a bad taste in their mouth while the other is having trouble sleeping and feels angry and depressed.

Despite the incredible difference in their symptoms, both of these people may be suffering from TBI or post-concussion syndrome.

Modern research has shown that loss of consciousness is not always associated with TBI. In addition, the symptoms of a TBI may not become truly apparent for days (or even weeks) after the injury.

This delayed response can be confusing to first responders, healthcare professionals, and TBI sufferers.

TBI & Concussion Symptoms : What to Watch For

If you’ve been involved in a car accident, fall, or received even a minor head injury, you should be on the lookout for potential TBI and post-concussion symptoms. More mild TBI symptoms may include:

Recovering from a TBI & Post-Concussion Syndrome

The unfortunate truth is that TBI recovery is unpredictable. Just as the symptoms of TBI differ from person to person, the recovery process and timeline varies widely.

If TBI recovery is so inconsistent in professional athletes, what can the average person do to maximize their chances of fast recovery from a TBI?

In addition to ongoing symptoms, TBI may put you at elevated risk of serious complications like strokes. Accidents and head injuries may result in damage to the brain’s blood supply. When this blood supply is cut off, the result is a stroke and the death of healthy brain cells.

The keys to minimizing the damage done by a stroke is early detection and fast treatment. 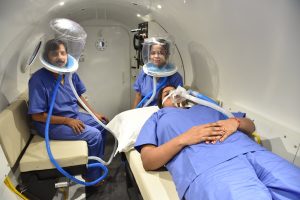 If you’re suffering from the ongoing symptoms of a TBI or concussion, don’t suffer in silence! Look for treatment options that may provide the relief you’ve been seeking.

At Urban Wellness Group, our physicians use an FDA-approved steel hyperbaric chamber to treat TBI patients at pressures up to 1.3-1.5 ATA. This helps your body absorb more oxygen, a necessity when you’re healing from a TBI.

Additionally, HBOT allows oxygen to infuse with many types of liquids your body needs to heal, including blood, plasma, and cerebral fluids. Through HBOT treatment, your body receives a boost in oxygen where it’s needed most, helping to reduce the symptoms of your TBI.

HBOT & AUTISM THERAPY: WHAT YOU NEED TO KNOW

Hyperbaric oxygen is used to treat all conditions which benefit from increased tissue oxygen availability and infections where oxygen can be used for its antibiotic properties, either as the primary therapy, or in conjunction with other drugs.

To consult our Doctor you have to pay for 500 rupees.